Club member Diane is currently teaching virtual yoga classes 3 times per week in order to raise money for 5 charities during lockdown. The charities are for Lupus UK, Friends of Young Carers (Banes), Samaritian Emergency Relief Fund, Womenandgirls.org and the RUH NHS Heroes. So far Diane has raised over £1,000. Hopefully there’s more to come as the weeks go by.

3 members from our club were given a guided tour around the station before presentating a cheque for £200.  The money was raised through a member’s tea party that was held during 2018 , more money was riased which went to Fair Trade.  We are hoping to have a club visit to the Ambulance station in August.

A neal’s Yard party was held at a member’s house which raised an amazing £365 which was given to the RUH Charity Appeals at the supper meeting on WEdnesdsay evening an dpresetned to Lauren Noble whoc is the Community Fundraiser at the hosprital.  Lauren gave us an update of all the appeals that are going on right now.

A tea party was held at a member;s house to raise money for these charities and over £200 was raised in the process.  Despite the awful waether everybody enjoyed a lovely tea with sandwiches, cakes and cream teas.  Flamingo cards and Fairtrade products were for sale also. 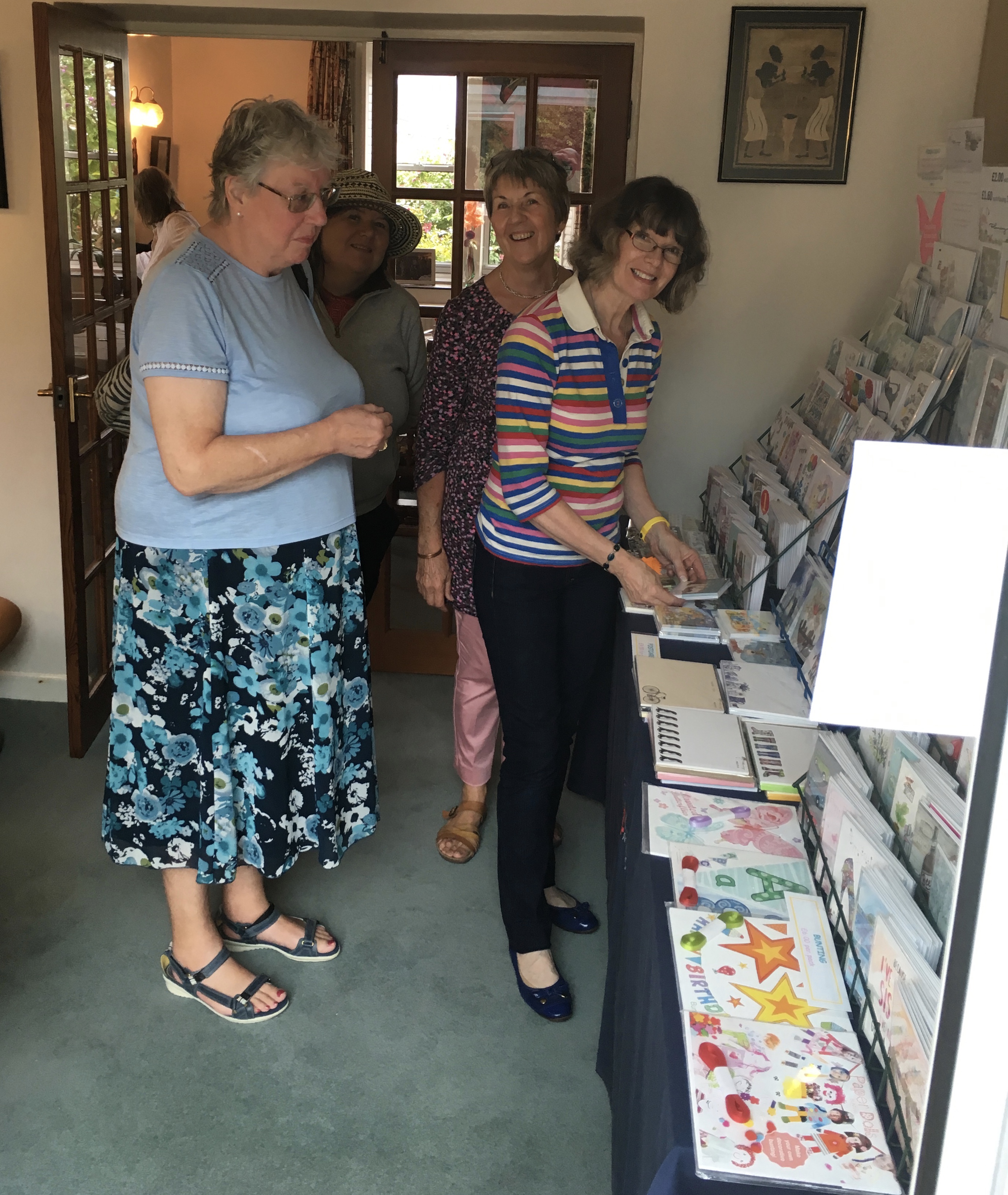 Helping out at “All Chipping in”at Great Somerford

Two members from the club helped with refreshements and stewarding at the Annual event on Sunday 5th August at Great Somerford. The cyclists had completed 34 miles of their 100 mile event and were ready for drinks and snacks. it was a very hot day but they all seemed to be enjoying themselves and it raised money for Julian House and the Rotary Club

Helping at the Brain of Bath quiz night

Club member Gillian was able to help at this annual event for Julian House which raised around £10,000 which was an amazing result for this very worthwhile charity.  Will Glennon, a BBC Wiltshire presenter was the quiz master for the night.

It was a beautiful day for raising money for the RUH Forever Friends Appeal at Prior Park Garden Centre on 9th June.

It was pretty cold but many people were quite generous with their spare change to give to a worthwhile cause.  It was the RUH Bath’s turn to receive the donations at this match.

President Helen opened up her home and treated us to a lovely tea complete with sandwiches, homemade scones and a variety of cakes.  Donations were made all for a good cause for the charity “Across” which enables very poorly people a chance to visit Lourdes in the wonderful jumbalance which President Helen accompanies from time to time.

We celebrated World Literacy Day by handing out free books to commuters and travellers leaving and entering Chippenham station. We were supported by local MP Michelle Donelan and raised money for Julian House from the generous donations of commuters.  Thanks Chippenham!

Serving refreshments at the Cycle Sportive ride in Great Somerford.

Riders welcomed some refreshments during their 100 km cycle ride.  Some of the proceeds from the sponsorship went towards Julian House who we support on a regular basis.

Bath and District members held a bucket out to passers by at Prior Park Garden Centre and raised a wonderful £212 for the Genesis Trust in Bath on Saturday 27th May.  It’s such worthwhile charity and we were glad to help.  The coffee wasn’t bad either!

A coffee morning was held at President Gillian’s lovely home on February 25th to mark the Fairtrade fortnight.  Fairtrade products were on sale and lovely cakes were made for the occasion.  There was also a raffle and the sale of Phoenix cards and plants.

£170 was raised and it will be shared between Fairtrade and the Macmillan Nurses Charity.  Many thanks to members and for friends for supporting these worthwhile charities.

PRESENTATION OF CHEQUE AND BLANKETS TO JULIAN HOUSE

President Gillian and Diane visited Julian House to present a cheque and our homemade blankets to Cathy Adcock from the charity.  Cathy was delighted with the gifts.

COME ON YOU BATH!

Over £1,700 was raised at the Bath versus Harlequin game on Saturday 18th Feb by volunteers including our club.  It was amazing how generous people were on the day. It was the best collection so far of the season! The donations are split between the RUH Forever Friends Appeal, the Samaritans and the local Cats and Dogs Trust. 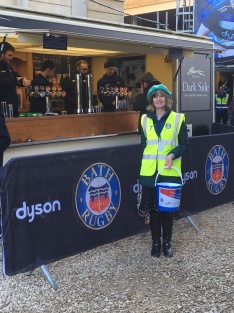 100 Innocent bottle hats knitted by members and presented to AgeUK  representative.  Each bottle sold will bring in 25p and given to AgeUK. 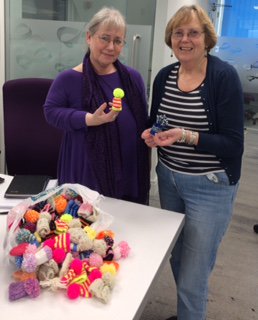 We were able to present a cheque for £160 to Sarah Buck, fundraising coordinator for the Genesis Trust at our January meeting.  She explained the importance of such a worthwhile charity helping the homeless in Bath.  We also gave her a blanket that members had knitted recently.

Our Annual Quiz night raised £450 for 3 charities this year which included the Genesis Trust and Julian House both based in Bath and the Federation Meru Women’s Garden Project. The questions were set by the Genesis Trust which proved to be quite difficult!

We held a club tea party to raise funds for the Federation’s Meru Women’s Garden project  which is an ongoing 3 year project.Fundraiser for Fairtrade and the Trussel Trust

President Diane and members from Chippenham Cancer Support Group show off one of the cakes that helped raise money for their charity. 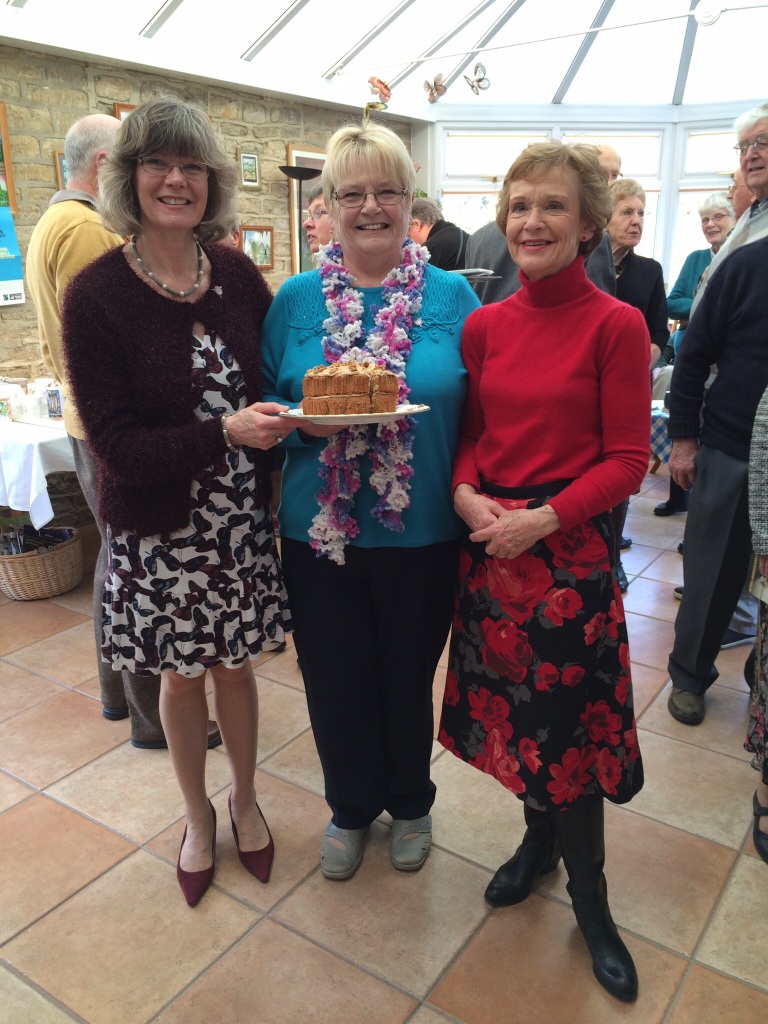 Bras all bagged up and ready to be collected to send off to Africa to help women earn a living by selling them on or recycling the bits!

Bras ready for the off!